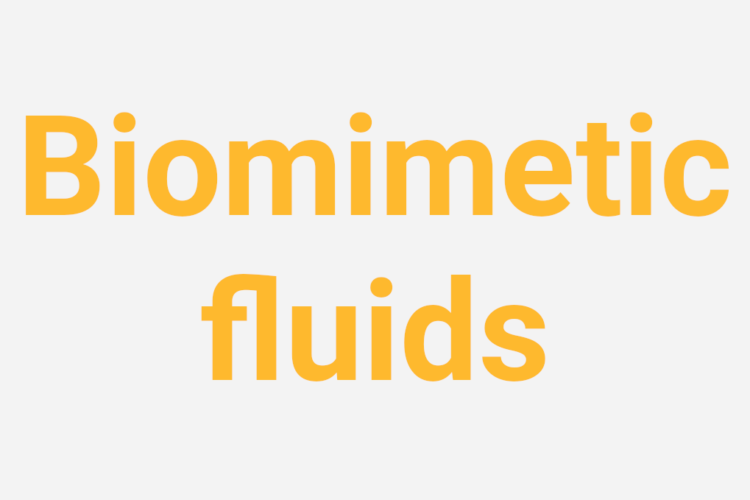 While blood is an elegant solution to a very specific problem, solved through evolutionary adaptions that took millions of years, similar problems exist in biomedical industry and research. The transport of small particles in hierarchical networks is presently in biomedical topics: tissues engineering, chemical and biological reactors and drug delivery. Additionally, one may wish to fine-tune the rheology of some fluids for mechanical engineering or research purposes. An example is the development of blood analogues for in vitro hemodynamics.

In this project, we adopt the view that useful solutions can be obtained mimicking solutions already developed by natural selection. A large set of biomimetic solutions for engineering problems has been created in this spirit (e.g. [1]). The purpose of the present project is to explore the range of possible blood like fluids and the methods to control their characteristics. The result, we expect,
will be a collection of biomimetic solutions to engineering problems. Additionally, we expect to develop a deeper understanding of how rheological properties emerge from the fluid components and interactions.

Particulate fluids will be developed by associating solvents, particles and additives. The additives can have two roles: modify the rheological properties of the base solvent and modify adhesion between particles. The range of properties to explore includes: solvent rheology, aggregation additives and particles shape, dimensions and elasticity. Other properties may be also of interest, in
order to adapt the fluid for particular cases, such as particle density and refractive index.

A crucial aspect of the project is the production of microparticles with tunable properties. Here, we take advantage of the expertise of the research team on microfluidics [PP2-PP4, 2, 3] and multiphase flows [PP1,PP5]. Two methods of producing microparticles are pursued: particle formation from droplets generated in microfluidics, and particles produced by photolithography. The former method has already been tested in our lab with success (see http://paginas.fe.up.pt/~jmiranda/fluidDesigner/index.html). The latter one is very flexible, allowing the production of disk shaped particles, but it requires experimental development. The fluids obtained in the project will be characterized in our lab rheometers and in experimental microfluidic devices.

The project will be focused in two applications: development of blood analogue fluids for hemodynamics research and development of particles for carrying solutes in vessel networks. The first application aims to solve present research limitations of blood analogues in hemodynamics in vitro research. No analogue exists that can simultaneously have the rheological properties of blood,
at all scales, and the adequate refractive index for experimental studies. The second application will take advantage of the particles fabricated to develop solute carriers for drug delivery and similar functions. We expect that these fluids and particles may find new applications the fields of tissues engineering and biotechnology, as oxygen and drug carriers. The technology developed will be available for commercial exploitation and could be the basis for a service of designer fluids on demand.